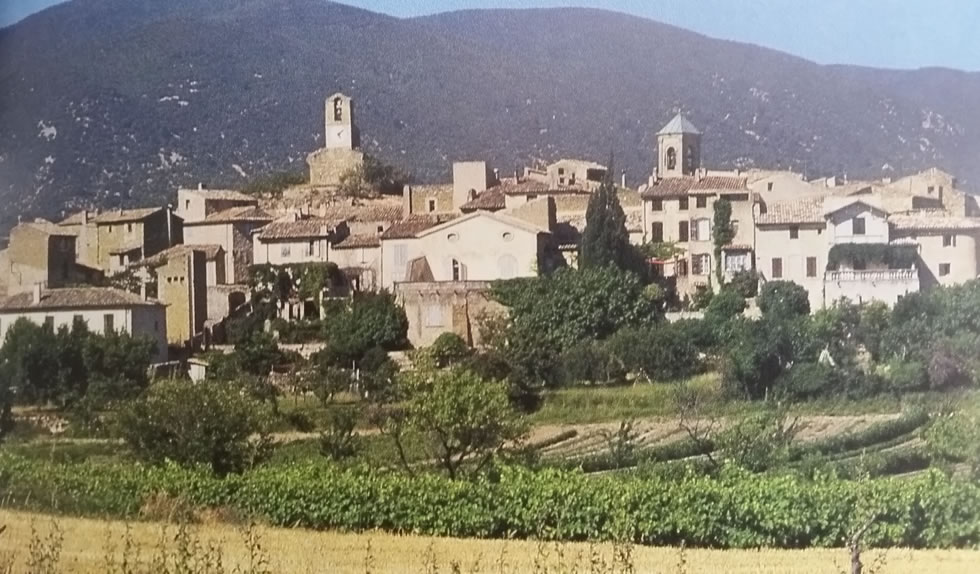 In April 1995  our valley had a visit from a group of winemakers from the southern Rhone valley, specifically,  the Cotè du Luberon bordering Provence in France.

Being mindful that their forefathers had contributed to the settlement of Huguenots here in 1688, they wanted to have a look at the progress of viticulture in the interim. The group was led by their own guide/translater, Marie – Odile Patin.  She was perfect for the job as she not only owned a vineyard in the Luberon, she was also involved in the communities’ public relations and marketing. During some four or five days the group visited various properties to bond with their heritage.   There was a farewell lunch at Polfeintjies restaurant (now Entrée).  Kind words were said, good wines consumed and Marie – Odile promised to keep in touch.

The following year I planned to go to Vinexpo in Bordeaux and contacted Marie – Odile with a view to spending a little time in her terroir.     In due course I found myself staying at a charming pension in the historic town of Lourmarins. There followed a number of trips to renew acquaintances, and what an experience it was with Marie – Odile now being the guide. The weather was perfect and the truffle omelettes sublime.  After calling at La Motte D’Aigues we went to Cabrierès  (Domain des Vaudois) among others.  By now there was a distinct feeling that I had found the source of a few of our own vineyards.  A source that is conveniently saved from the tourist hordes. Small villages with vineyards providing the ‘country wines’ that I admire so much.  Also the fun of finding a few eccentricities such as Conrad Pinatel of Chateau De mille who manages his property from horseback, and the vigneron,  whose name I forget,  who manages his vines wearing a three-piece suit with a Gauloise hanging from the lower lip. Provence definitely gets more attention than the Cotè du Luberon.

Tucked away from major roads this sleepy valley produces lots of ‘little’ wines that, like the horsepower of your Rolls Royce, may be described as ‘adequate’.   Oddly,  apart from appearing on wine maps of southern Rhone valley,  I could find no reference to any wine from the Coté du Luberon. Not even in the prestigious Alex Lichines’ ‘Guide to the Vines and Vineyards of France’ in his chapter on ‘The Lesser wines of France’.  This notwithstanding I enjoyed my introduction to new varietals like Carignan, Grenache and Bournoulenc.  We tend to relate our reds to berry flavours,  they to tobacco, burned sugar and chocolate (mocha), and so they should,  new taste sensations are an education.   Old connections with the past are as well.

We use cookies on our website to give you the most relevant experience by remembering your preferences and repeat visits. By clicking “Accept All”, you consent to the use of ALL the cookies. However, you may visit "Cookie Settings" to provide a controlled consent. Read More
Cookie SettingsAccept All
Manage consent

This website uses cookies to improve your experience while you navigate through the website. Out of these, the cookies that are categorized as necessary are stored on your browser as they are essential for the working of basic functionalities of the website. We also use third-party cookies that help us analyze and understand how you use this website. These cookies will be stored in your browser only with your consent. You also have the option to opt-out of these cookies. But opting out of some of these cookies may affect your browsing experience.
Necessary Always Enabled
Necessary cookies are absolutely essential for the website to function properly. These cookies ensure basic functionalities and security features of the website, anonymously.
Functional
Functional cookies help to perform certain functionalities like sharing the content of the website on social media platforms, collect feedbacks, and other third-party features.
Performance
Performance cookies are used to understand and analyze the key performance indexes of the website which helps in delivering a better user experience for the visitors.
Analytics
Analytical cookies are used to understand how visitors interact with the website. These cookies help provide information on metrics the number of visitors, bounce rate, traffic source, etc.
Advertisement
Advertisement cookies are used to provide visitors with relevant ads and marketing campaigns. These cookies track visitors across websites and collect information to provide customized ads.
Others
Other uncategorized cookies are those that are being analyzed and have not been classified into a category as yet.
SAVE & ACCEPT